Lynch is in good form. The story is simple – a detective (Lynch) is interrogating a capuchin monkey (voiced by Lynch) as a suspect in a murder. Most of the time, it seems they are having two separate conversations. All classic elements of Lynch’s style are here – the noir styling, the carefully stylised, oddly articulated dialogue, playing with clichés, the unsettling uncanniness of the surreal.

In resisting interpretation the way this short does, the film is evocatively beautiful and intelligent and poetic. It’s a treat to be able to watch Lynch do basically what he wants. Who’s to tell him otherwise?

I’d long meant to see this. It’s a pretty interesting take on the beauty industry and the lengths people could go to keep their youth. Unlike The Forest of Love* there isn’t as much absurdity and subtlety here. The film feels almost utilitarian in how it tells the story.

This was one of the weirder things I’d watched in a long time. I appreciated Sono’s self-indulgence in this. Reading other reviews, I saw one reviewer suggest the film doesn’t need to be nearly as long as it is. That’s probably true, but every moment takes you someplace unexpected. I thought the cinematography was weird and unorthodox, and the story violent.

At times, I was reminded of some of Takashi Miike’s (especially films like 1999’s Audition) and Quentin Tarantino’s work with the tremendous bursts of violence and absurd humour, and most importantly, the huge acting performances (most notably Kippei Shiina as Joe Murata). 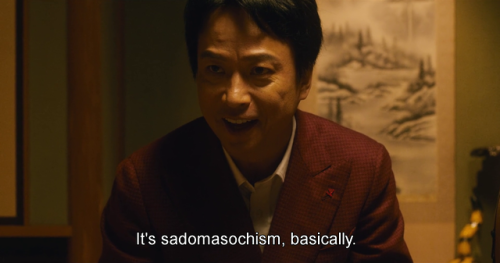 I regret it took this long for me to watch this. I guess that might be understandable, given the subject matter. Even though this is twenty years old, I think the film is very current. I’m still processing, since I’d watched it last night – I might have further thoughts.

View all posts by Maks Sipowicz